My Secret Rock and Roll Fantasy

I've always loved music in a big way. All kinds of music. And I had a secret dream. I wanted to be a backup singer.

I never seriously coveted the lead vocalist spot - that didn't seem like as much fun. My favorite experiences were singing with other people - doing four part harmony with my girlfriends in high school, harmonizing with my mother, my best friend, my daughter, my son - whoever would sing with me. There's something about that blending of voices that just thrills me to death.

But I'm no musician and probably never will be - my real talents lie elsewhere.

I got to do it anyway.

I live with a real musician - a man whose talent blows me away on a regular basis. And on his latest album, he put me to work. I felt pretty frozen at first, but as time has passed I have gotten more comfortable hearing myself through headphones (and worse, in playback) and I will admit I'm loving it. In a big way.

Go ahead and listen. The amazing wailing background vocal isn't me - I'm no Machan Taylor (she is just incredible!). But the breezy bridge backup vocals? That's my daughter and me. It just doesn't get much more fun than that!

We Are Living in Remarkable Times

I was young in the sixties and I believed that people, working together, could change the world. And then I watched the world "grow up".

But for better or worse, I was right. The revolution in Egypt proved it. The ripples have spread out to other people in countries that have endured what they consider unjust and repressive governments for too long.

I learned there is now a progressive answer to the Tea Party - the Coffee Party. And their goal is to force government to enforce its tax laws with corporations that have dodged legal taxes.

You can go there, look at the number of people who've signed up, and check back a few hours later to watch it grow.

But tonight I am stunned. There are reports that police in Wisconsin marched into the occupied Capitol with orders to evict the protesters by 4 AM. And instead, they have joined the protest.

Brave New World or Two of These Things Now Go Together

You will think I'm ridiculous, but I feel like the first man to walk on the moon. Or maybe like I've just taken my first ride in one of those newfangled auto-mobiles. Or like Alexander Graham Bell when his telephone worked.

I'm blogging on a bus.

Now this is probably a huge so what for most of you. You've been dragging your laptops around to cafes for years. You have an iPad. An iPhone. You probably Twitter (an unfortunate habit, in my opinion). But understand that this is new turf for me.

I resisted computers for as long as I could. We actually rented our first one from an outfit I can no longer recall and which is undoubtedly defunct - but the deal was you rented the computer and after a couple of years you owned the out of date piece of junk. We kept it for years.
I just went to a flat screen monitor three years ago. Laptop? I still don't own one - but my daughter just gave me her old Macbook Pro and here's where it gets incredible (to me).

I had to go to New York City today. It's a two and a half hour bus ride and it's pretty boring. So, I think to myself, why not bring the laptop? Maybe there'll be a wireless signal, maybe there will be an outlet (her batteries are fried beyond replacing), and if not, I can sit at a Starbucks and look like everybody else for awhile. Damned skippy.

But what to my wondering eyes should appear as I take a seat on the faithful Trailways bus, but an outlet. Two of them, in fact. One for each seat. And it gets better. When I fire up Gideon, as my daughter named this machine, a little message comes up asking me if I'd like to access the wireless remote network "Trailways". The bus has its own wireless signal!!!

So I am, at this very moment, speeding up the New York State Thruway, a young man in the seat in front of me snoring quietly, a woman across the way reading The New Yorker and eating her fourth snack of the trip (she's a small woman - but she's obviously hungry), and I am typing away on the Intergalactic NetWeb!

This is innovation beyond my wildest dreams. This is future shock.

It's not perfect. The bus shakes so much that the ac adapter periodically falls out of the socket and the screen goes black. The Model A wasn't perfect, either. But it was a big switch from the horse and buggy. And rather than staring out the window, which I do plenty of, thank you, I can sit here and blather on to you, my hapless readers. Until you move on to the next blog.

But isn't it amazing that a person in a bus seat can actually communicate with the entire world?
I wonder if we realized what a revolution computers would be...and we need only look at Egypt to know it now - computers started a revolution there!
Posted by Susan at 3:27 PM 3 comments:

What a surprise - it's snowing. 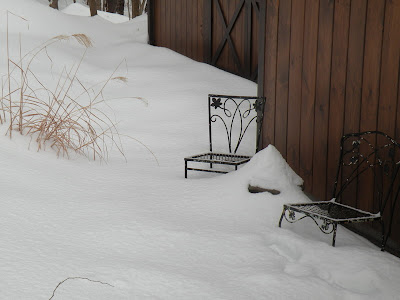 “I prefer winter and fall, when you feel the bone structure of the landscape - the loneliness of it, the dead feeling of winter. Something waits beneath it, the whole story doesn't show.” Andrew Wyethe 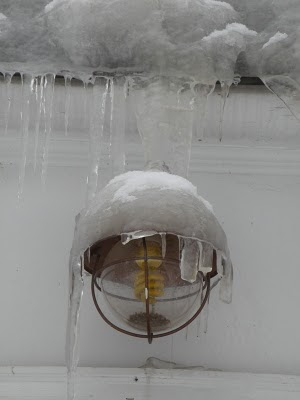 “Sometimes our fate resembles a fruit tree in winter. Who would think that those branches would turn green again and blossom, but we hope it, we know it.” Goethe 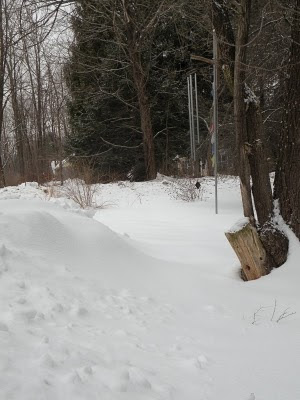