What is happening to me?? 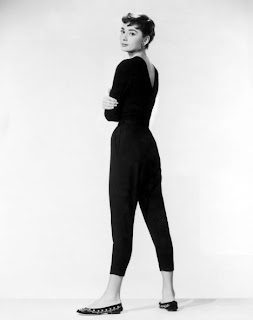 I've got a birthday coming - the big 55.  I'm truly okay with it, mostly.  A bit frightened about the unknown, but basically at peace with me, my life and my past. Most of the time.
But I'm having a quiet internal fashion revolution.
All my life, I rebelled against "Style."  I have been a bare feet, jeans or Indian skirt kinda woman. I taught high school English dressed in Indian print harem pants.  I have been defiantly nonconformist.
So why is Audrey Hepburn (who I have always loved but never sought as a style guru) looking so good to me now?
I'm drawn to simplicity, to monochromatic outfits with one splash of color.
When I was a young mother, I went through my cabbage rose phase.  Every knit top or dress I possessed had big, fat flowers on it. Somewhere along the line I sent them all back to Goodwill (from whence they came; I'm a lifelong thrift shop denizen) and traded them for plainer fabric or simple, small, abstract prints.
So there's a precedent for this shift.
Let me make this plain: I do not have the Hepburn body.  Maybe I could, if I starved.  I do not starve.  I have hips. And thighs that I prefer to not think about.
But even with my more generous proportions, there's an elegance that I'm shooting for.  It's what I think of when someone says "French."
I whacked all my hair off once, very much like Hepburn in this photo. It wasn't me and I grew it out immediately, but what surprised people I knew was that they suddenly found I looked "French" - whatever that means.
So I've got the potential.  And I'm undeniably grown up.  Despite the fact that I may be, as one person tells me I am, a bohemian artist, that doesn't mean I have to wear Earth shoes and drawstring cotton pants.
So I'm curious about all this fashion stuff.  I don't buy into it, and I absolutely deplore the prices women pay to copy it, but I'm interested to see it.
I saw it the other night on HGTV, of all places...and not where you might think.  There was a couple from Wisconsin or some other rosy-cheeked middle of the country state who were moving to Paris.  Their realtor is someone I remember from another Househunter International Episode.  Her name is Adrian Leeds. She looks like a NY deli expert transplanted into France.  Her salt and pepper hair is wiry and long, tucked back behind one ear.  She has huge glasses, bright red lipstick.  And topping it all was a jaunty beret.  She looked fabulous - and definitely someone I'd enjoy working with.

That's what I'm shooting for - elegant personal style with a bit of  whimsy.  Nothing you'll find in a magazine and certainly nothing I would copy from anyone else.  But it'll take some research.
You'll find a couple of new blog recommendations listed on the side here from "fashionistas" (sorry - I have to go be sick for a sec).
Don't judge me.  I'm just curious.
Posted by Susan at 9:07 AM 2 comments:

Watering Down the Hate

I'm where conflicting groups come together. I'm the place where old hatreds are forgotten.  You may be, too.

That's the realization I had as I was reading Marshall Tito in Queens, an editorial in May 4th's New York Times.

My grandmother was born in Dubrovnik.  It was 1900, long before the ethnic tensions bubbled over and tore the country apart.  Her parents moved to New York City, where her father, who was half Irish, practiced medicine.  But Dr. Mooney and his Slavic wife were homesick.  They sought other Yugoslavs, others with whom they could speak their language and relax their struggles to become American.   They found other immigrants from their world in a creekside Hudson Valley working town a couple of hours north of New York by train.  They bought a little farmhouse down the road from the Yugoslav lady who grew grapes and happily returned each summer to remember where they'd come from.

Their children, my grandmother and her sisters and brother, preserved some of those memories.  Together, they spoke in Serbo-Croation, though they were all Americans.  They called it "nashki" - "ours."  It bonded them. They used it to cut out people who didn't belong.

Yet none of them married Yugoslavs.  My grandmother married a Jew.  So did her sister.  And here's where it gets strange.  My grandparents never told my dad and my uncle about their Jewish relatives.

My mother, born a year earlier, was the eighth child of a poor dirt farmer in Indiana.  She told of boarding the creaking bus that took her to school, hearing the other kids hoot "Cat-Licker!"  Her mother was a Catholic of German descent.  Her father was a Protestant who didn't think a fight about the Pope was worth the trouble - he converted.  If those kids had known Lou Gobel's secret, my mother would have had a lot more trouble.  He was part Native American.

It was something he told his kids, but my grandmother would quickly deny it.  "He's just kidding," she told them.  It was bad to be Catholic.  It was much worse to be Indian.

There's no proof.  My mother looked for it.  Her father said his grandmother came from a tribe he called the PinkaMinks.  A ridiculous name.  It had to be a joke.  But the Iroquois River near Kankakee Illinois is also known as the Pinkamink River. He had the high cheekbones, the deepset eyes I've seen in pictures of native warriors. My mother believed him.  I do, too.

So here I am, the product of intermarriage between religions, between ethnicities, a blend of nationalities both friendly and fraught with tension.  I am no longer a Catholic.  My children combine all my bloodlines plus the Irish and Polish blood of their father.  Their children will blend those lines still further.

This is how conflicts end peacefully.  They end when there is no more "them" and "us."  It takes time.