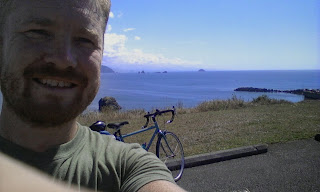 Charlie Deitz is not one to conform and his career has taken a number of unusual turns because he refuses to settle for work he doesn't love doing. I met him when we were both working for a National Public Radio affiliate – he covered the news in the Berkshires of Massachusetts and I covered New York's Hudson Valley. We both left for jobs that paid better, and when we reconnected he told me a lot has happened in the past five years or so. The latest news was he's earned his Master's degree from the University of Oregon. And he's at a crossroads again.

“It was a long haul, so thank God it's done. Now I can start the longer haul of PhD work. I do instructing and I'm also taking classes, but I'm still a slave. I don't make any money.”

“I'd like to have a hybrid job – do some reporting in some form and teach some classes. There are little mini-laboratory environments that get created – little projects, experiments – that's where you find the cool output from the professional world and academia when they start talking to each other.”

Deitz said before working as a bureau chief, he'd never been a field reporter. He put together an audition tape from gigs as an overnight radio news anchor.

“Before that I bounced around. When I moved out west from Jersey, I started working for AAA and made it to mid-level management, but after a few years I wanted to drift. And taxi driving would fund that project. But I always wanted to get into NPR. And I think it was after we had our first miscarriage was when I really felt like I needed ot make good on this life – go after what I wanted to do. That's when I got into the radio broadcast program outside of Portland, which opened the door to the overnight radio and then the affiliate in New York. The change was massive. Enormous. Earth changing. We were all very excited when the call came that I got the job. But we found out the Berkshires were a lot more expensive than we anticipated. And after we finally got a place, we found we were pregnant. And it was the beginning of the Great Recession. And my wife couldn't find work and we had to live on my salary. Not to badmouth the station, but I wished they'd paid me more. We moved to a smaller place. And after about two years, there wasn't any upward momentum. We'd gotten a raise – and I was like “Oh my God – I'm never going to be able to even buy a dinner. Everything's going to be out of a box.” I was living where the boss told me he wanted to live, and I was getting paid mileage, which I needed to help make ends meet. Then they moved the office and I wasn't in a position to move again. That was another $150 a month hit to our budget and that's what really forced me to start looking. I started sending out my resume – sent it both to colleges and newsrooms and figured I'd let the chips fall where they may. Turns out there's really a glut of talented people in the NPR world, stations weren't getting back to me, and University of Oregon got back to me and put money on the table to get me there.”

They took the Oregon offer, as it also put them back near his wife's family. “She found work after six or seven months, which isn't that long compared to where we'd just been. But to be able to have a house that was nice and clean, I really felt that difference. In the Berkshires, it seemed like every other week something massive would break – like the toilet would drain into the washing machine....”

Most people don't imagine that the reporters they hear on the radio or see on television might not be able to pay their bills. And thirty years ago, it wasn't an issue. But today, producers in a middle market television newsroom work part time in retail to pay their bills. Reporters for an NPR affiliate make thirty thousand or less – after years on the job.

“Reporters struggle. Especially TV reporters – they have to buy suits? I don't even own a suit – I don't know what I'd do. I'd probably look like some seventies sitcom extra.” 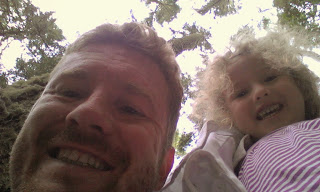 So what's he doing next?

“Right now, I'm at the point where I really don't know. I'm going through a divorce – nice little curveball – so I got into the PhD program back in March, then this happened, we each moved into our own places and split our time with Penny (their daughter). If this was chess, Katie definitely check-mated me because I eventually wanted to leave this area and look for jobs in California or back east. Now I'm kind of stuck here. Katie's not moving and I'm not even considering being away from Penny. So the PhD program is kind of a placeholder until I figure out what I can do here in this town to survive – something that's hopefully good for the world and pays me enough to pay for my apartment for say the next fourteen years. I have to play along – throw the designs out the window. But while I'm here, it's pretty fun to be in it for now if I don't think about where it's going. I get a lot of cool opportunities in the program.”

And I noted he'd get to be Doctor Deitz when it was over.

What happened, I wondered, to that sense we used to have that if you took a step ahead, you could plan ahead and be pretty sure you'd land on solid ground?

“I think that's what people tell themselves so they can force themselves to take a step. Like some sense that history is trying catch up with you and eat you if you don't move fast enough. I don't know anybody who's just kind of coasted into some luxurious lifestyle. Most of the people, even the professors, they had to go through the fire, too. Just like in news, academia is seeing a shift, towards pulverizing the entry level folks who do most of the work. It used to be you'd get your PhD, you'd work a few years, get your tenure. Now people who are associate professors have second jobs. I just have no intuition for where to go.”